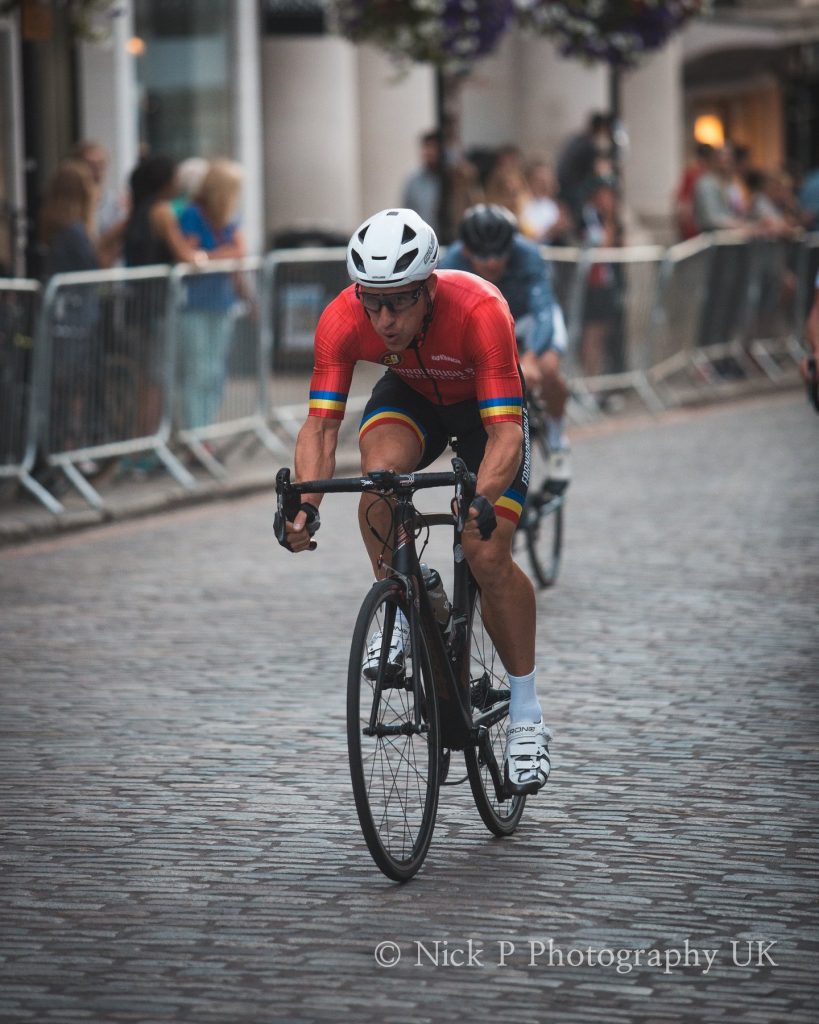 Off the back the long and hot 60 mile Lingfield Road Race where I sneaked a point placing 15th, it was time for a racing of a completely different kind.

Town Centre Crit season is upon us and having missed out on my home town crit in Winchester last month, I was determined to make the most of both Guildford and Farnham.

So it’s really hot right now. 27/28 degrees Celsius seems to be norm of late so I won’t bang on about the heat as it didn’t effect the races, only in a positive way in bringing out the crowds.

There was a lot of chat about the big hitters playing their part at Guildford and they certainly did that. It was cool to line up with the Canyon Eisberg boys (and other Elite riders), even if it did blow away any chances of points.

With this wide gulf of ability across the E12 race, a select few had a 1/2 lap handicap. This enabled me and the other pretenders to delay the inevitable; getting lapped by the front groups and bowing out to clear the course.

However, I put in a lung busting 40 minutes of cobbled intervals and stayed upright despite some bouncy tyres on the fast tight corners so was happy that I didn’t retire out of choice.

As ever with these races, the pace is frenetic from whistle and then it becomes a power file of two halves; recover down the back descent (about 1/3 of the course) then put the hammer down along the flat side street that pops you out onto the cobbled high street incline where you bury yourself until you eyes bleed and you hit the top corner, rolling into the gentle descent to catch your breath. Repeat!

These high intensity repeated efforts suit me quite well and whilst I was out of depth in the field, I was hellbent on leaving nothing in the tank, wanting to prolong the experience for as long as possible.

After receiving our instructions to leave the course, the remaining 10 or so laps played out with Max Steadman pulling away to win by the best part of a whole lap. Seeing who was on his tail, this was seriously impressive stuff.

Looking at the start sheet, I was more optimistic of my chances for points than Guildford but with a strong field, it seemed unlikely. On the ride over from Fleet, I did a few openers and my legs weren’t there. Couple this with a baby who’d decided not to sleep the previous night and I was already justifying a nil points result in my head.

As with last year, I wasn’t that smart in finding a front row slot on the start line and then two guys I did choose to line up behind had awful starts; one couldn’t clip in and the other kept slipping his chain. Seconds of their fumbling felt like minutes. The drama had already started!

Therefore, I was forced into chase mode immediately. I’d not even got up to speed as I saw the group string out and enter the first corner across the broken road surface. But you know what to expect so you just dig in and ride out the fact you’ve taken your body from a resting heart rate to knocking on the door of anaerobic heaven and hell.

I could see the hitters had already split the field. As I’d come round one corner, I’d catch up a glimpse of them sling-shotting round the next corner. Between them and me was the second group. No wheel to follow. I had to find one, quick.

I buried myself for lap after lap to get onto this chasing group and was dangling perilously. Knowing that the match box was running close to empty, my race would have ended prematurely had I not got on as I was burning my gunpowder at an unsustainable rate. Eventually I reeled them in and took my opportunity to recover, staying on the last wheel for a few laps before moving up the group during one of the few opportunities.

We chased down the front group (I saw ‘we’, Mr Ranoe basically chauffeured us there) whilst shedding a few off the back as the screw was turned. Several crashes saw some of us leap into the points positions (1-15) and with helpful snippets of information coming from the crowd, tactics became clear; stay upright, don’t take too many risks but ride on the limit when you have to.

With 5 laps to go the field had thinned to 9 and would remain that way until the chequered flag. In all honesty, I didn’t hear the bell (but I heard lots of cow bells) and didn’t see the lap board once so was blissfully unaware that we were on our final lap. A few moves were made but with limited overtaking opportunities, the order of merit stayed pretty constant.

The lads in front of me took the final corner quicker than me (i’m just wanting to stay upright) and thus opened up a small gap to the finish.

In the end, I came 9th which is hugely satisfying and rewarding.

Support was raucous as always and the cow bells help create a buzz (if also a little confusion). Having a few mates from the club or chaingang groups dotted around the course meant I was hearing my name several times per lap which definitely eeks out a few extra watts. Cheers everyone!

I highly recommend people enter town centre crits races. Why? There are so many reasons;