After a sparse road racing calendar in 2019, my fitness began to drop more than I’d anticipated it would.

Switching the default outdoor ride choice from road to MTB has been really fun and my ability to do punchy efforts has remained in tact but the sustained higher intensity efforts have been neglected.

Also, with the long summer days, using the trainer seems criminal thus any truly structured training has fallen by the wayside. Sadly, there are just not enough XC events to keep form at a decent level, compared with road racing.

Enter the 2/3 Dunsfold Race. With the expectations of being able to deliver a few attacks and ideally a break, I went a bit crazy during this race. Myself and Will Ranoe jumped off the front and held a 2-up break for a lap or so then 3 others bridged over. This was also shut down, then a counter attack followed which (sods law) stayed away. 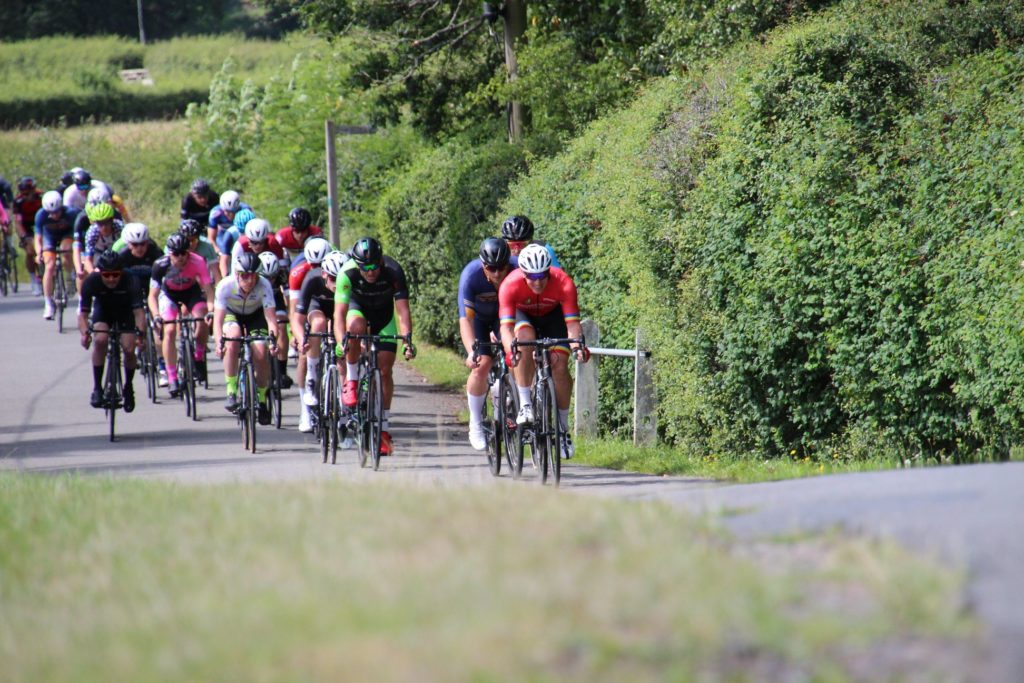 Never the shrinking violet, happy to die trying to make something happen.

I was marked out from jumping across but tried again and again, burning my matches until the box was empty and I had to watch as the bunch slipped away on an innocuous stretch of 3% gradient. Gone. Out the back door. Of a 2/3 race. Reality hit! 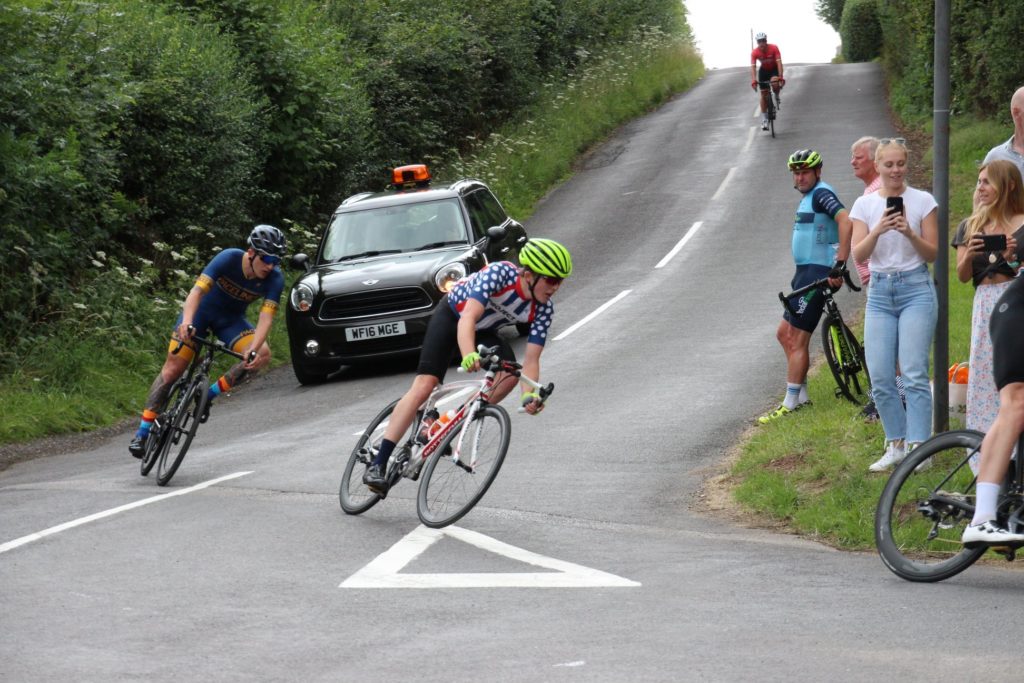 There’s me. No not banking into the left hander. I’m just out of shot after being spat out the back.

Next up was the closest handicap race to me, over near Ottershaw. Had the rest of the circuits been this close (and not near Gatwick) I’d have done much more of these in 2019, but I was able to manage the first and last in the series.

Surely I couldn’t get spat in an hour race? I was in the penultimate group which I knew wouldn’t get caught by the scratch group. No offense to the scratch group but there were no Elites and only a single Cat 1 against a very strong group that we found ourselves in. Therefore, the play was to either try and make a move with my FCCC team mates or sit in, do my work and see how it played out on the finish line. 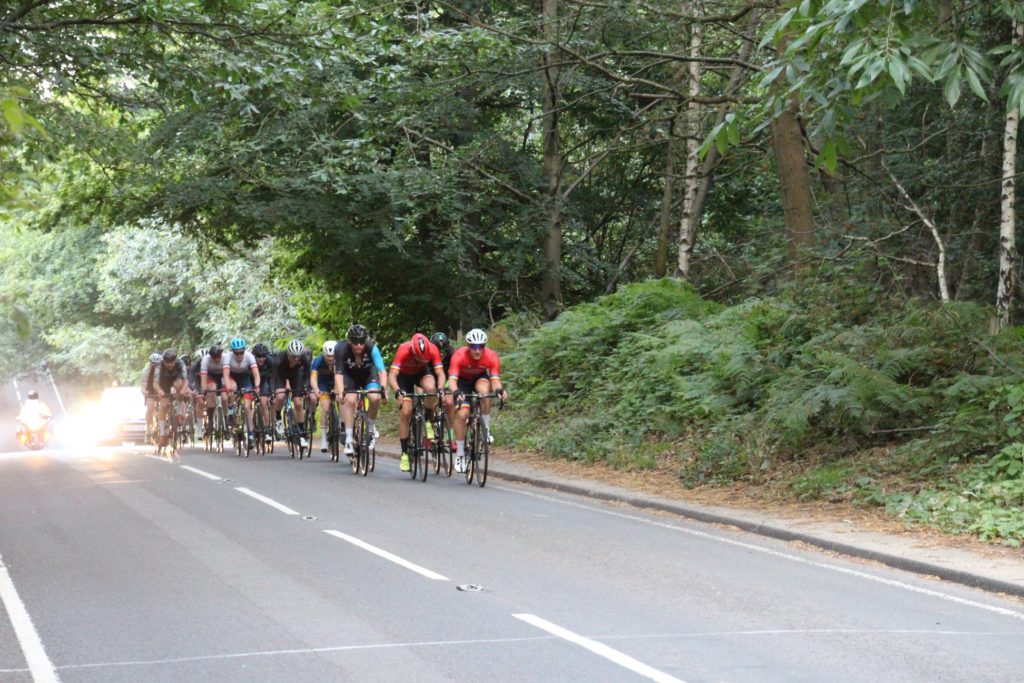 Decent group that worked well together.

The race presented very few opportunities to get away so it was becoming apparent that it would be a bunch sprint. Some people started to miss their turn and it was no surprise to not see those folk in among points. 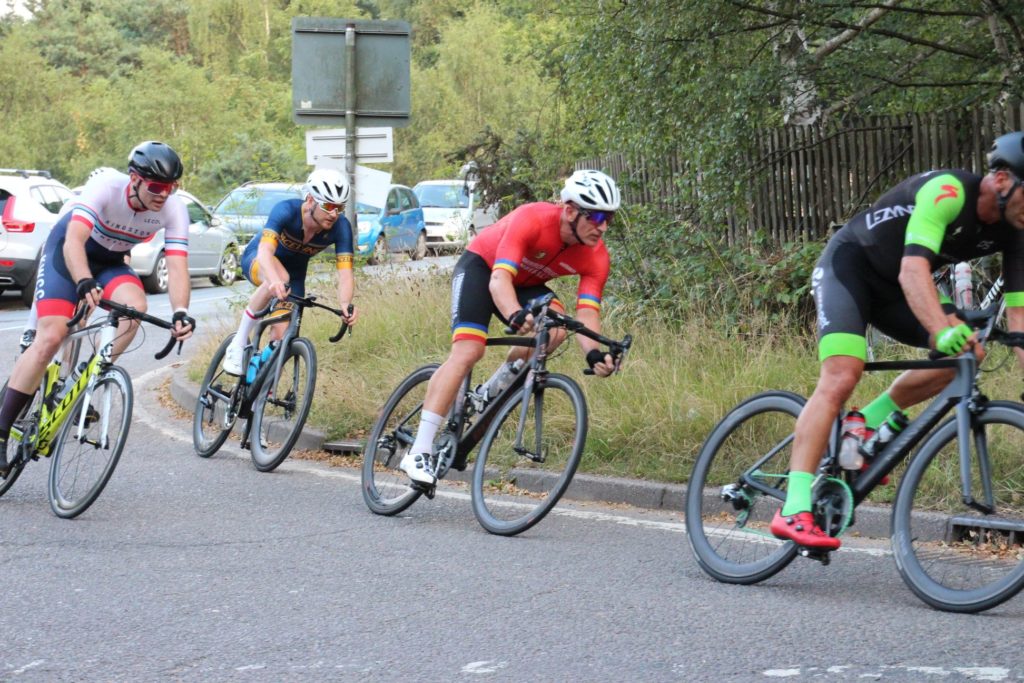 A short but high power race provided some decent high intensity training on what was the hottest day on record in the UK. 39 degrees!

The intense heat played its part with some riders clearly suffering. As we caught the groups ahead, not too many were able to join our chain gang. On the final lap, my team mate, Mark, found himself away with another rider from Kingston Wheelers. I tried to hold our group back but the tactics were obvious so people came around me to shut him down as we rattled down the back straight descent. 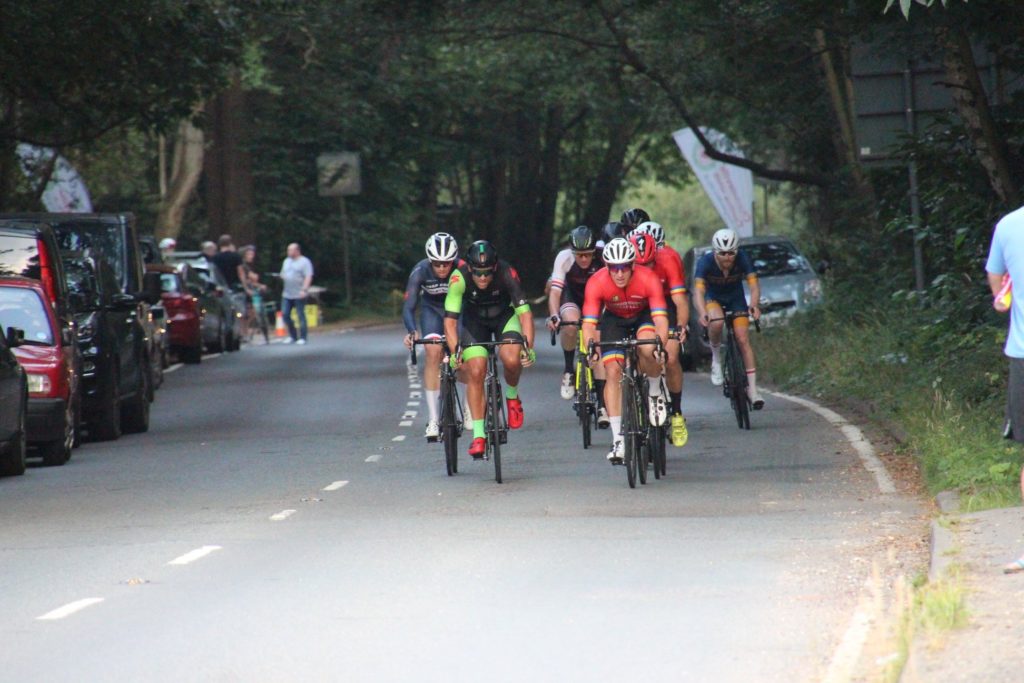 It was nice to try some team tactics with Mark, for the first time ever in a FCCC jersey. In fact, in any road race ever!

Positioning on the final corner is key so I made sure I had a good spot and took a wide line, finding myself second wheel. I held this until he started to flag so went round him and tried to hold it for the remaining 200 metres to the finish.

It was a big ask and 4 came round me but 5th was safe by a decent margin.

Knowing I needed to keep my eye in, I scoured BC website for a road race. Nothing was available so I chanced it with the Bath CC race and contacted the organiser. ‘Luck’ would have it, someone had just dropped out so I wired my money over and submitted my details. I was in and knew I’d rue the good fortune of getting a place but I was there to go deep not win.

The course was notoriously lumpy and there weren’t too many 82kg lads there under 6 foot with a ‘sprinter’ frame like my chunky (in cycling world) body but I was there to hurt and hurt is what I did. 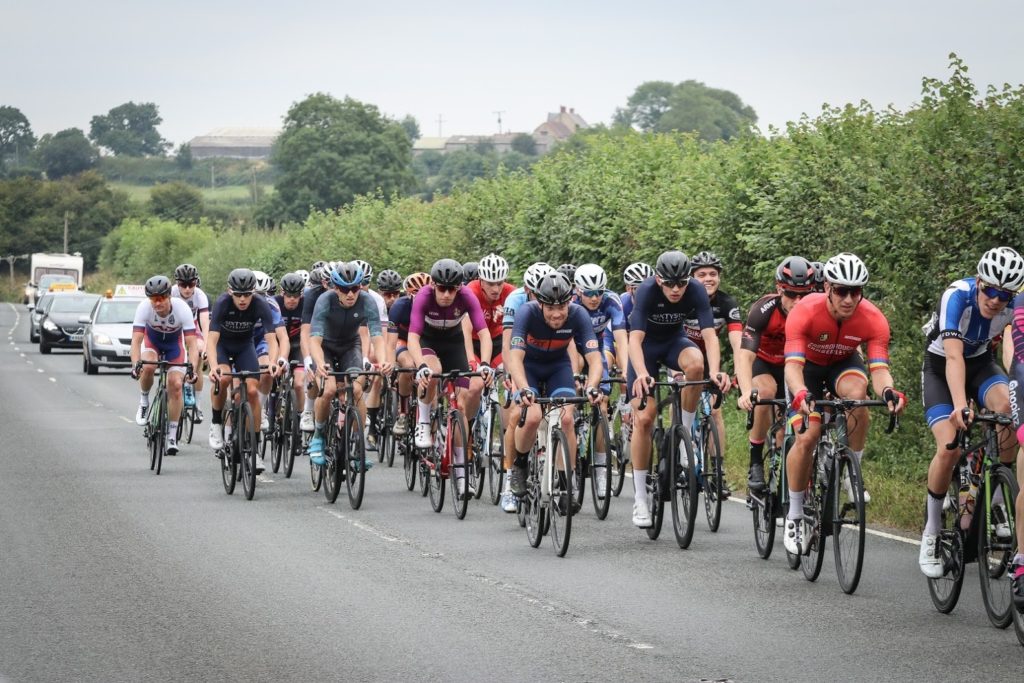 Early laps were punchy and a break formed after a couple of laps. Needless to say, I wasn’t in it!

The lump in the Cotswold is known as Stowey Hill and itss significant enough for a KOM competition to have been held on every other lap. At the time of writing, I haven’t been contacted about a prize but I live in hope that I wasn’t really the slowest up the hill. Man, I used to a hill specialist!

As with any good bike race, the split often occurs after the hardest section of the race and this was no different. It’s where the weak are separated from the strong. After each climb up Stowey, the pace ramped up and the elastic was stretch to near breaking point on many a lap. I sag climbed every time which meant getting into position at the front of the group on every lap which was just as well as I was always last over the top. On the last few laps, the elastic did snap and I had to bury myself to get back on the wheel that was agonizingly close but yet so far. 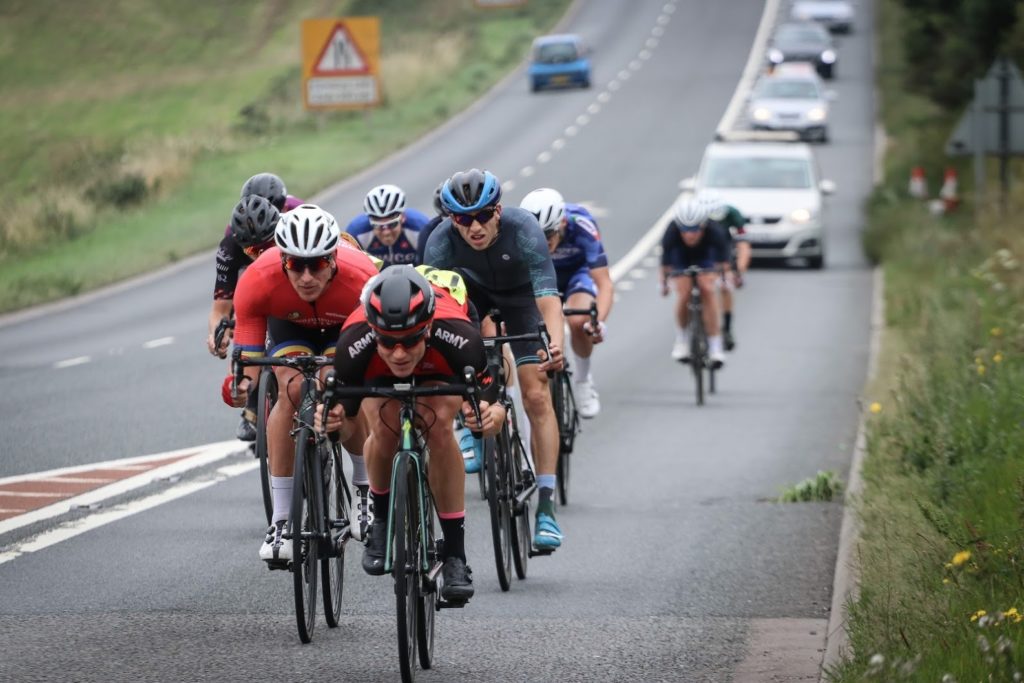 The descent was a fun highlight for me. I topped out at 56.3mph without even having my Miche aero wheels on. The R60 seemed to pick up more and more speed which enable me to effortlessly make up some places.

Despite being castaways, our bunch seems committed to laying down a good pace which at times was very testing for my cramping legs and weakening mind.We tried to operate a chain gang but we were all too beaten down to make it a fair roll through.

Within our bunch of about 10, I didn’t care about where I finished. My objective was to race hard, find my limits and complete the race without getting dropped. Most of the lads found a final roll of the dice within their tanks and hit the final turn of the climb at a decent speed amidst fantastic support. I was languishing, fighting off cramp in every muscle in my legs. But I got over the line and it was mission accomplished. Just. 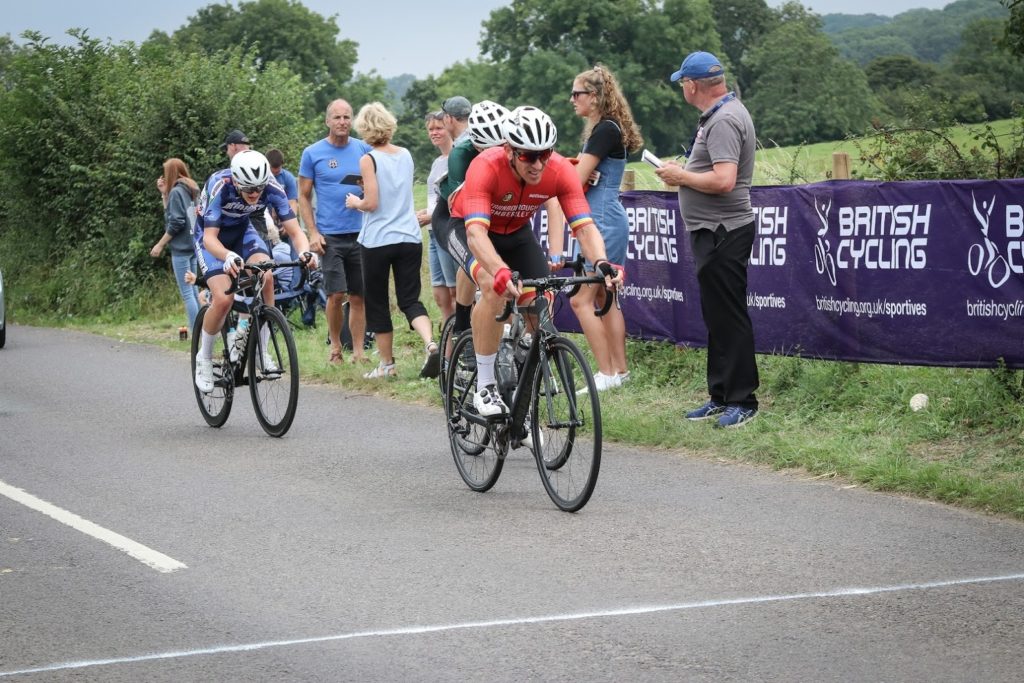 Limping over the line. Great course, fantastic event but perhaps not designed for my body type!

Photo credit for these goes to two awesome photographers;

Cycling Widow – Life Through a Lens