Heading up the M6 fully loaded with the Lavington brothers aboard, a text came through from the ferry company that our 11am crossing from Liverpool to Douglas, Isle of Man, had been cancelled. 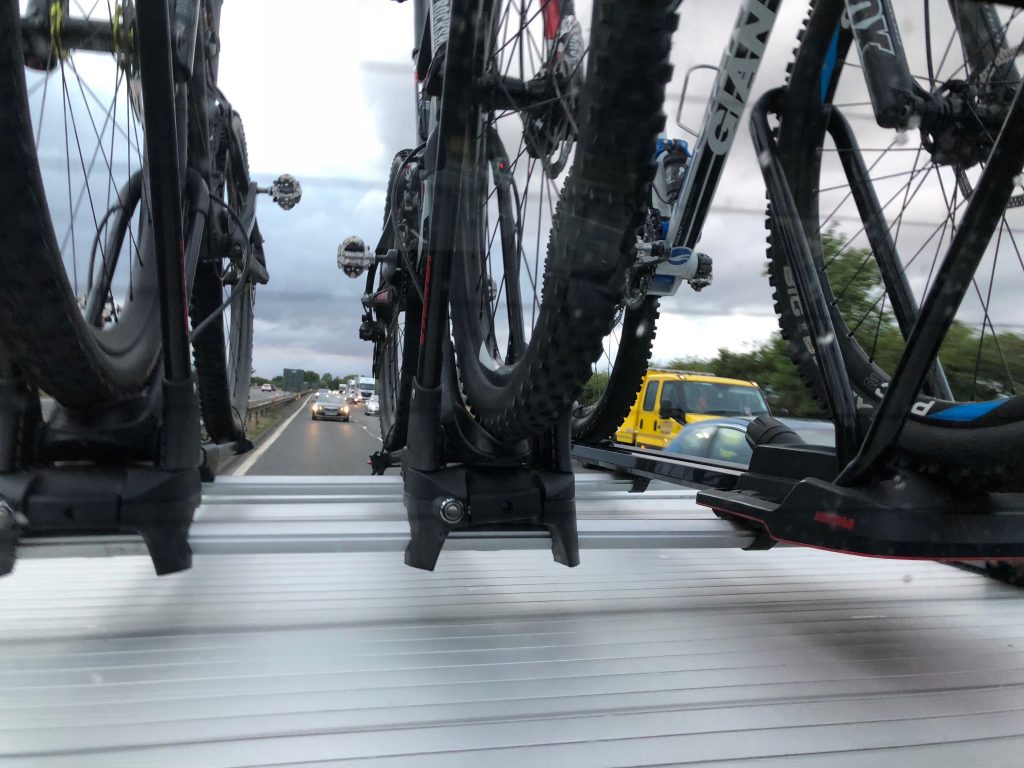 With the race starting at 0600 the next morning, we were potentially stumped. The phone was hot with calls to the Manx100 organiser, Air B&B host and the ferry operator.

The much needed rain began to batter the truck as we ploughed on northbound and toyed with other options. Passing Cannock, we were tempted to divert to the highly regarded trails which was very appealing as I’d not been back there on my MTB since my childhood when my grandparents lived on the Chase.

Nigel, the workmanlike organiser of the legendary race, tried to get us on the only other crossing that day, the 7pm catamaran, but got told it was full. Ever the eternal optimists, the Lavington brothers wanted to press on and try to get us on that boat by their powers of persuasion in person.

Shortly after arriving on Merseyside, Charlie successfully got our tickets transferred to the 7pm crossing so we camped out in the very agreeable Malmaison hotel in the docks for 7 hours. 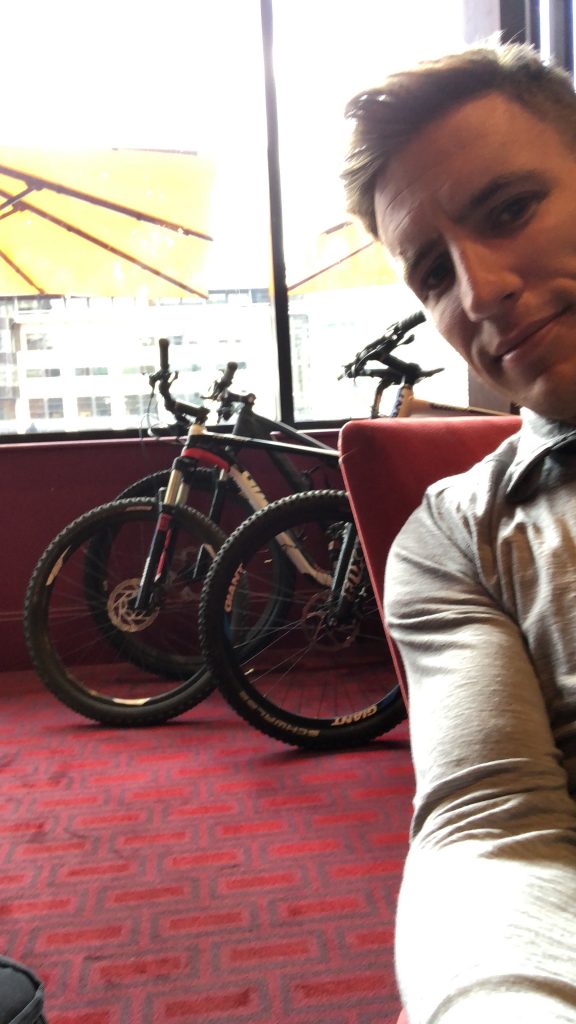 The staff at Liverpool Malmaison were brilliant and very hospital to us strays!

The downside was that we’d have to leave the truck, and lots of gear, in Liverpool and get on as foot passengers. 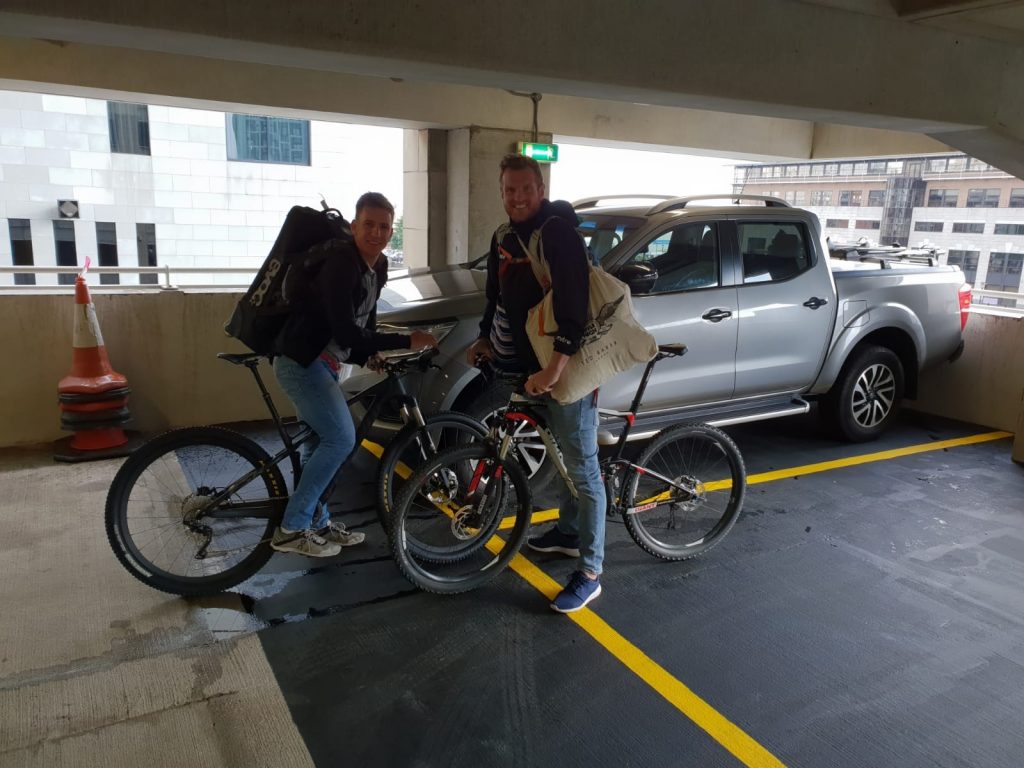 Foot passengers with no extra gear or kit to take with us.

The storm had well and truly hit by the time we were sailing across the Irish Sea. Pete was benefiting from dosing up on sea sickness tablets unlike the kids sat next to us who were going through sick bags for fun.

Due to dock at just after 11pm, we had to prepare our kit for the aid stations on the boat so we could get as much rest as possible during our imminent 4 hour sleep.

Our Air B&B host was immense. Butch, who grew up on the island, had done the event several times so knew what we were facing.

He’d got in food supplies for breakfast and we were more than comfortable in his self-built loft apartment (check it out if you visit the IoM).

The alarm was set for 0400 and when that time came around all too soon, the rain and winds were lashing against the windows. Not sure what happened to the 2018 summer heatwave but we were there for a test and that’s what it would be.

Rolling through the port town of Douglas at dawn, we were already soaked to the bone by the time we’d arrived at the TT Grandstand for sign on.

Not expecting rain of such biblical proportions, I’d not packed either of my brilliant breathable and water resistant jackets (fail) so instead had to make do with a gilet and knew that I’d get cold on descents and if I had to stop at all.

As the start time crept up on us, I was in the midst of perfect preparation. My competitors in the National Championships warmed up on rollers in the pouring rain whilst I stole a few more minutes kip.

Neutralised, we rolled out to the start of the course. As ever, things were quite punchy despite the race not having started. A mile or so and it was a left hooker straight up the mountain. 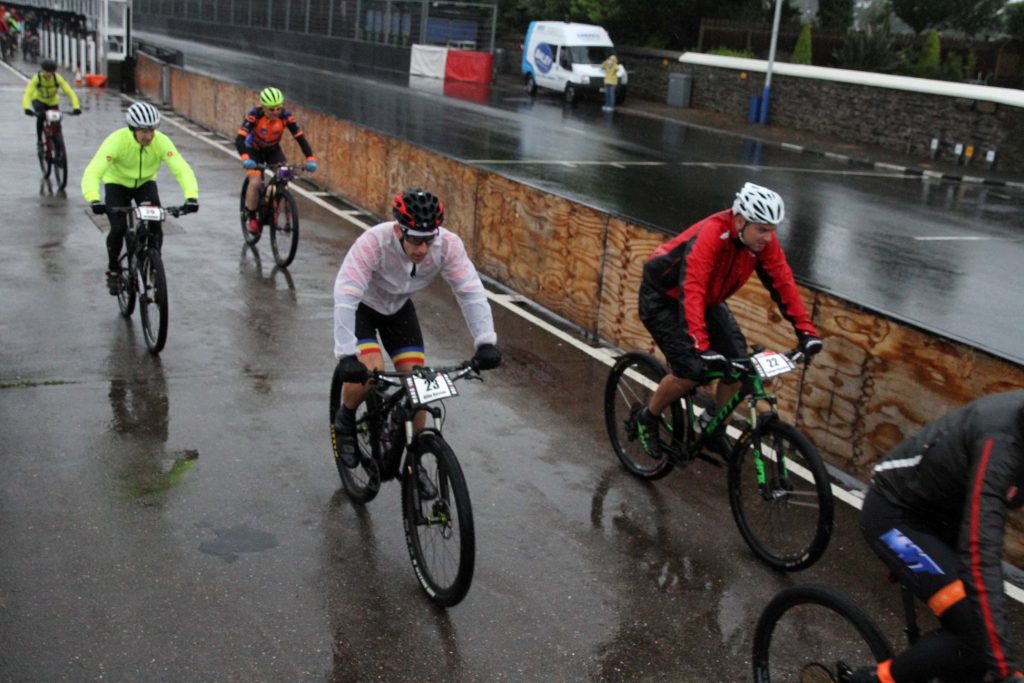 The pace was quick and the filed strung out but with a gaggle of the strongest riders staying as one unit up ahead. Rain was lashing down which made traction on the rocky surface quite tricky, especially on the steep sections, of which there were many.

Kit choices were very questionable as my Oakleys steamed up and thus got banished to my rear pocket. Eye wear or not, seeing was proving difficult on the sketchy descents. Spray, rain and dirt was hammering my face and squinting through it was the only option.

The fact that there weren’t any obvious line choices made it very much a ‘wing and a prayer’ type affair. The only mantra worth remembering was that ‘speed is your friend’ when descending rock gardens. I trusted my very capable tires and just let the bike roll as much as possible.

As predicted, I was hot and sweaty on the climbs and cold and shivery on the descents. Climbs were testing with often the best ‘line’ being to ride in the fast-flowing rocky stream and not along the narrow banks. 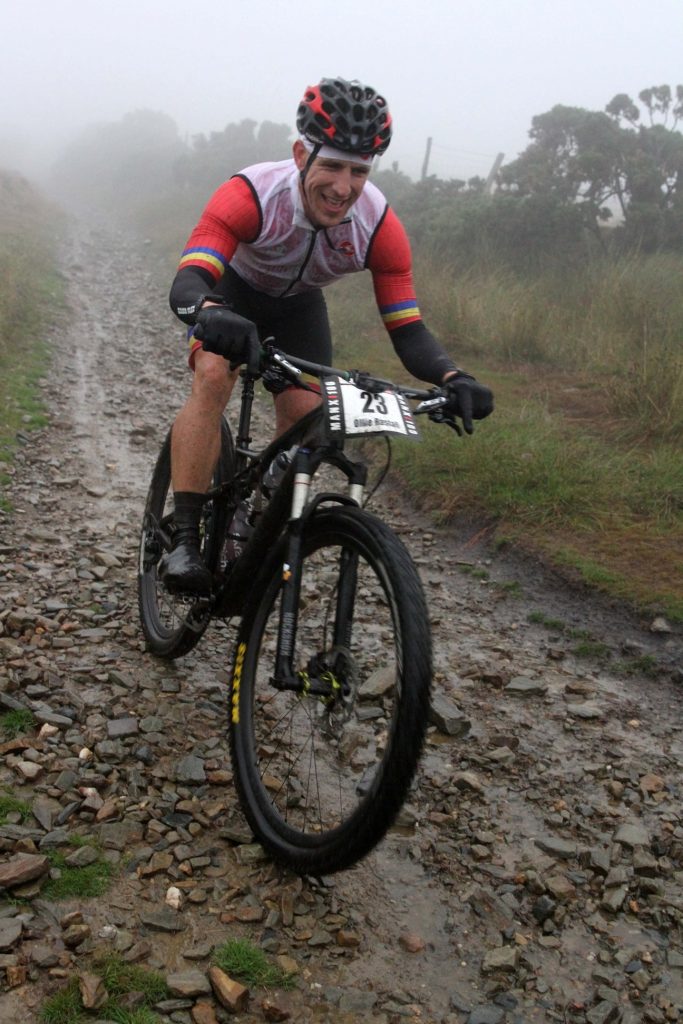 Happy to do it and loving the challenge.

I was in the company of Rebecca Leaper, who came 2nd in the women’s category and we seem to leapfrog each other time and again until I took a spill on a 90 degree country lane bend.

It was a classic get-down with bike and rider sliding pain free across the slick tarmac until we were buffeted by a grass verge. Jumping back on with the sweet smell of pedal-to-tarmac grinding, I cracked on into the field along some deep tractor ruts.

No sooner had I mounted the bike and I was off again, this time being catapulted over the bars after my pedal caught one side of the rut. Thankful for a soft landing, I checked the bike over and tried again.

A fast and treacherous descent into feed station 1 meant I was on the edge of being cold. I decided not to load up with two bottles as weight was proving a huge factor up these super steep climbs.

The beginning of the end

A long climb out of a small town was when I noticed my dropper post slipping a few millimetres. I popped it back up (to do this you need to rise out of the saddle – basically an extra bit of work) but only to find it sank back to the new height. This compromised my position on the bike and meant my quads were doing far too much work and thus screaming.

The only alternative was to keep pressing the lever to regain full height for at least a few pedal turns until I’d have to repeat. This was causing havoc on my work rate and wasn’t sustainable.

Had it been dry and therefore more grippy, I possibly could have just ascended out of the saddle but the grassy moors was so slow that being in touch with the saddle was the only way to propel myself forward with the rear wheel losing traction.

The crosswinds smashed us with real venom as we gained altitude. We were in, then above, the clouds and it was only the well signed course markers that convinced me I was still on course. Plus, the fantastic marshals who were, as usual, the unsung heroes of the event but were only visible at the last second due to the dense fog.

It was 10 miles until the next feed station and a chance to take advantage of the neutral support from event sponsor, Shimano. Those 10 miles were some of the toughest 10 miles I’ve done on a bike and I was pretty relieved the see the blue van parked up in the car park next to my 2nd kit bag.

I was welcomed by a really sound chap who was supporting a rider ahead of me. He was so keen to help me get my kit, holding my bike and offering assistance (the little things are massive when racing). Both the Shimano guys were fast asleep in the van so we woke one up (the other didn’t even stir) and explained the problem.

I have a cable operated dropper post, not a hydraulic one, so the issue had to be cable related. Basically, it was working in the opposite way as it should so; sunk down when I was sat on the saddle and popped up when I was out of it. The lever was behaving as though it was being constantly compressed.

The mechanic gave it quick look and then compressed it for himself with both hands, confirming that it needed ‘new seals’. I told him it wasn’t a seal issue, it was a simple cable job. A stand-off ensued as he flatly refused to repair it using my diagnosis.

The clock is ticking and I’m starting to shiver. I told him that I’d DNF if he couldn’t fix it, hoping he’d appreciate the importance of his mechanical opinion but I didn’t get the reaction I was looking for.

With no fix for the mechanical, I had no option but to retire. 35 more very hilly miles whilst not being able to sit down was not an option so I pressed end on my GPS and text Nigel, the race organiser.

Our legendary host, Butch, answered the SOS call and was with me within 20 minutes.

The Lavington brothers missed the cut off time for the second check point so decided to call it time. We reconvened at Loft, showered and fed then made a dash for the next ferry off the island, a day ahead of time.

Mechanical – to drop or not to drop?

Drop. I stand by the decision to use a dropper. Yes, it’s a bit heavier but getting it down and out the way on descents enabled me to do them with much more speed and control. Sure, it failed but I’d used it for over 6 months with no issues. I’ve since identified the issue and it was a simple cable fix, annoyingly.

Not really. At the time of writing, I don’t have a niggling desire to make all that effort to do this race. I loved the toughness of it as that is what separates you from the rest.

It was brutal at times but being able to hurt whilst on the rivet is part of being an endurance athlete. The technical demands of both ascents and descents were akin to those I’d experienced many times in Bubion, Seirra Nevada, with the Switchbacks crew.

The cost, logistics and time away from my young family, plus a very sexy bucket list to tick off before I repeat events, means I won’t be back any time soon. That’s no reflection on the race or the Isle of Man. Nigel and his team do any amazing job of putting on the race and are super human at their ‘jobs’ (they’re all volunteers, of course).

I’d recommend it to any XC mountain biker who wants to test their ability (both cardiovascular and technical) as you get such diverse terrain. It’s like riding through four different countries.

Big thanks to Nigel, Butch and the Lavs for an enjoyable, if unsuccessful, experience.